Some Thoughts About Carbon Pricing Myths

The Ecofiscal Commission released a report aimed at what they

called myths about carbon taxes.  Unfortunately, especially for a group that bills itself as academic experts, it likely created more myths than it debunked.

The opening paragraph starts by repeating alarmist claims that floods and wildfires are caused by climate change.  This is outside of mainstream science.  The IPCC has concluded there is no evidence linking warmer temperatures to floods and wildfires.  Plus it is a stretch to imply that a carbon tax will end or even diminish floods or wildfires. (https://www.ipcc.ch/sr15/)(https://royalsocietypublishing.org/doi/full/10.1098/rstb.2015.0345)

Sadly the report uses false a priori reasoning and sometimes out and out false statements in support of their political position supporting the climate policy. Consider this take on the myths and facts below:

Myth one: carbon taxes are not new and untested.

This is not an actual myth.  We aren’t sure who has ever said they are new and untested because they have been used in Europe since the early 1990s.  They go on to say because they have been tried before that they have worked for decades.  In fact, the evidence of how effective carbon taxes are is still ambiguous.  For the most part, emissions have continued to rise in jurisdictions with carbon taxes.  Arguments that they say have worked are actually arguments that emissions have risen less quickly than they would have otherwise.  There is evidence for this but there is also evidence against it.  Developed nations have generally seen a decoupling of emissions growth from economic growth in jurisdictions with carbon pricing and those without.  The United States has had the most success in reducing emissions in the OECD and mostly doesn’t have carbon pricing. (https://www.forbes.com/sites/rrapier/2017/10/24/yes-the-u-s-leads-all-countries-in-reducing-carbon-emissions/#15b49ec53535)

On this one, the Ecofiscal Commission simply moves the bar.  First, they redefine effective as meaning any progress on emissions versus meeting climate targets our governments have set.  Ecofiscal themselves started on the premise that carbon pricing would be effective in meeting our goals and later acknowledged supplementary measures (new regulations) would be needed.   Second, they take ambiguous evidence using counterfactual economic models to say it is a fact rather than a hypothesis, that the BC carbon tax reduced emissions by 15%.  Note that emissions in BC actually increased since implementing a carbon tax, and what they really mean is the modeling says emissions went up 15% less than they might have. (http://www.env.gov.bc.ca/soe/indicators/sustainability/ghg-emissions.html)

Ecofiscal notes the redistribution part of the federal government policy will mean a majority of people receive rebates repeating the government speaking point which is true.  However, this is only part of the story.  Someone must pay the tax and under the plan, it’s mostly small businesses who pay and will have to recoup it through higher prices, less investment or lower wages.

This is not a myth, no credible research indicates that a new tax won’t impact jobs.  A revenue-neutral carbon tax minimizes the impact on jobs but it doesn’t eliminate it and the plan is not revenue neutral in any case.  In addition, the study Ecofiscal refers to says the shift in jobs was from higher paying jobs to lower paying jobs.  How are lower paying jobs not hurting jobs? For Canadians, this is a choice of what is a reasonable amount to hurt jobs knowing we are helping the global environment.

Myth five:  Big polluters are getting a break.

This is not a myth and Ecofiscal says as much. Ecofiscal correctly says big emitters are getting a break but so are households.  Meaning of course that the tax ends up falling mostly on small emitters (small business) and families using more than average amounts of energy such as wealthier families but also many rural families.

Myth six: The carbon tax is a cash grab.

Under the policy, the Government redistributes 90% of the money and promises to spend 10% on environmental projects in the province it comes from.  This is not so different than income taxes where the Government also spends all the money on redistribution and programs.  Just because the Government spends all the tax revenue doesn’t mean it isn’t a cash grab.  Different people might have different opinions about the cash grab comment, but it’s clear the policy is a tax and spend policy not a revenue-neutral policy. The Government will also continue to collect the increased sales tax on top of that. (https://www.nrcan.gc.ca/energy/fuel-prices/18885)

Myth seven:  People can’t change their behavior due to a carbon tax.

This is another strawman myth.  No one said people can’t change their behavior at all.  What people are saying is demand for home heating and transportation is inelastic and it’s difficult to change behavior in a meaningful way to avoid the carbon tax. This is confirmed by many economic studies. (https://www.sciencedirect.com/science/article/pii/S0301421517300022)

Myth eight: There is no point to the carbon tax if the money is rebated.

Ecofiscal is generally right about this, if people and big emitters reduce their fuel consumption it will reduce their carbon taxes but won’t affect their rebate.  Small emitters won’t get a rebate.

Myth nine: There are other better policies to reduce emissions.

Ecofiscal has been one of the key sources of the myth that there are only two choices between carbon pricing and regulated mandates.  There are at least eight policy buckets to address emissions (http://policyoptions.irpp.org/magazines/april-2018/we-need-a-common-sense-climate-policy/)and Ecofiscal has no research on six of them to say which are better.  Further, the research arguing that carbon pricing could be more effective than regulated mandates refers to a system that is revenue neutral reduces regulations and is widely applied internationally.  The government policy doesn’t meet any of those tests and so Ecofiscal is comparing a completely different carbon pricing policy idea than the one being proposed in Canada.  In addition, there are researchers proposing flex regulations as better policies and a recent paper on reversing carbon leakage as a better policy. Ecofiscal hasn’t doesn’t work here and is just repeating a myth of its own.

Myth ten:  There is no need for Canada to reduce emissions.

With respect to Ecofiscal’s opinion here, Canada should indeed set an example, but it is an advocacy opinion, not a fact.  We should also be realistic that Canada already applies some of the best technologies and regulations in the world plus we are a relatively small percentage of world emissions.  Our ability to make a meaningful difference in world emissions using a local approach to climate policy is therefore not large.  However, that is no reason for Canada not to pull its weight on an important international problem.  Canada could potentially make a bigger difference by looking globally for emissions reductions opportunities.

The Ecofiscal Commission has prepared an advocacy paper for the point of view they advocate for. The graphics are excellent.  The arguments are not very good and use more myths than they debunk.  What’s disappointing is academics with doctorates using the credibility of their position to advocate for a political position with polemic arguments rather than real research. Ultimately this will undermine the confidence of the public in the credibility of academic experts.

To quote Ecofiscal “Myths and misleading statements, however, continue to damage the debate over carbon pricing. A debate based on poor information does a disservice to Canadians.”  We agree and we encourage Ecofiscal to fund and carry out genuine academic research to allow Canadians to assess the efficacy of the many policy options and in particular, to examine the impacts of carbon leakage by industry segment and region. 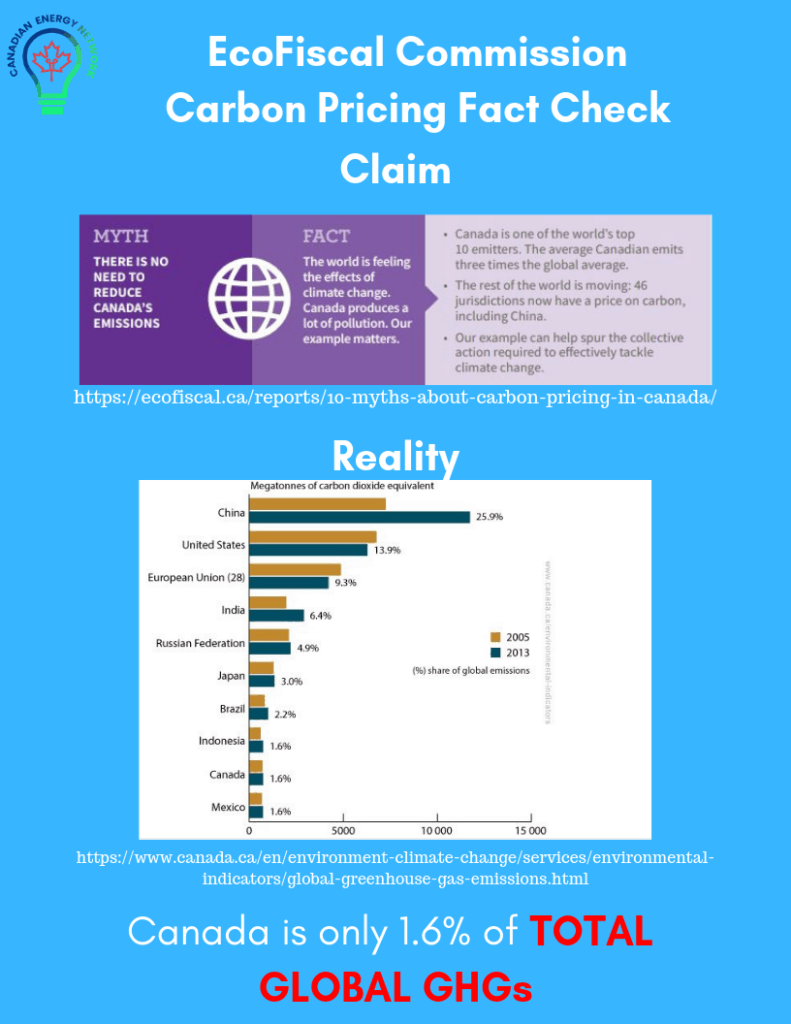 Foreign-funded activist video claims gas companies in B.C. are the cause of a drought

The Coastal GasLink project is helping local First Nations take control of their lands and resources including through equity agreements in the pipeline.

Oil and gas companies generate billions in government revenue, and are investing heavily into carbon tech to lower emissions.